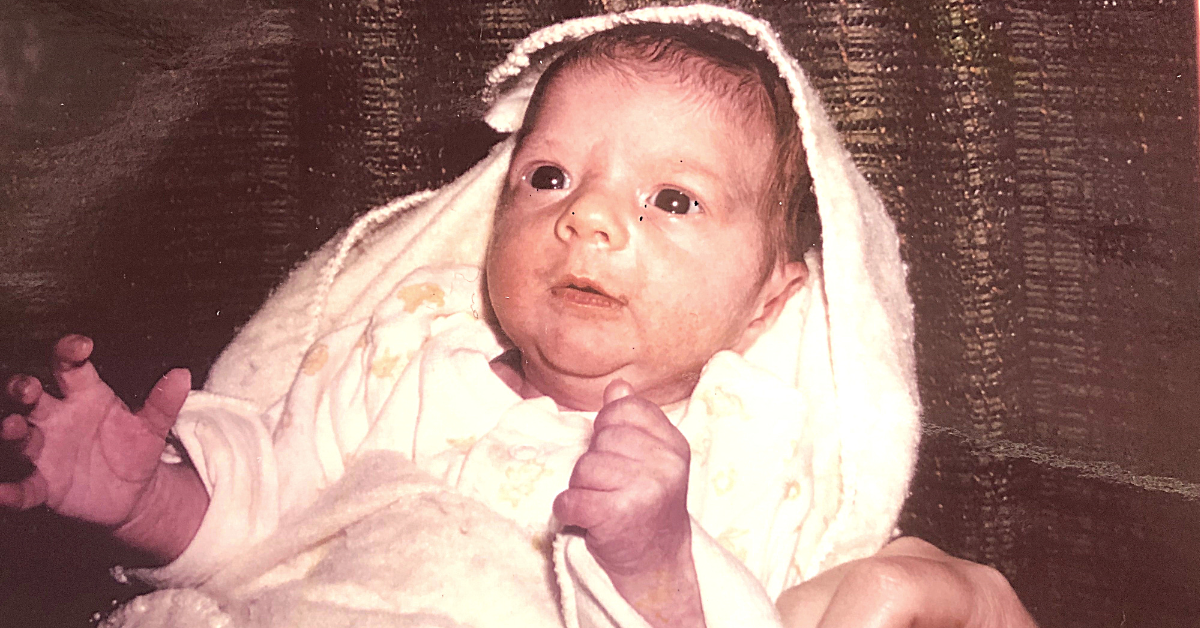 As I reflect on my journey in becoming a breath coach, I can’t help but wonder if my birth story is a piece of the puzzle. I recently interviewed my mom with questions and details of my birth story and was surprised to hear what she had to say.

Our life begins and ends with the breath. There are moments in life that take our breath away. And there are moments where we need to catch our breath. Either way, we often take breathing for granted until it escapes us.

This is how my life began.

It was a mild Sunday afternoon in St. Paul, Minnesota. My parents were eager to watch the Vikings vs. LA Rams football game set to kickoff at 2:00 p.m.

My mom, a passionate cook, prepared a seventies-style meal of meatloaf (my dad’s favorite), potatoes, veggies, and red Jello-a staple ’70s side dish.

This mid-day “supper” was a Sunday tradition. At eight months pregnant, my mom removed the meatloaf from the oven just as her water broke, leaving a trailing puddle on the kitchen floor.

This came as a complete surprise as her due date wasn’t until December 15.

My mom quickly gathered the dinner she had prepared (for some reason, it was imperative to her that the food didn’t go to waste), and she and my dad headed out the door! On the way to the hospital, they swung by my grandparent’s house to drop off the meal (again, no waste!) and continued to St. Joseph’s Hospital in St. Paul. 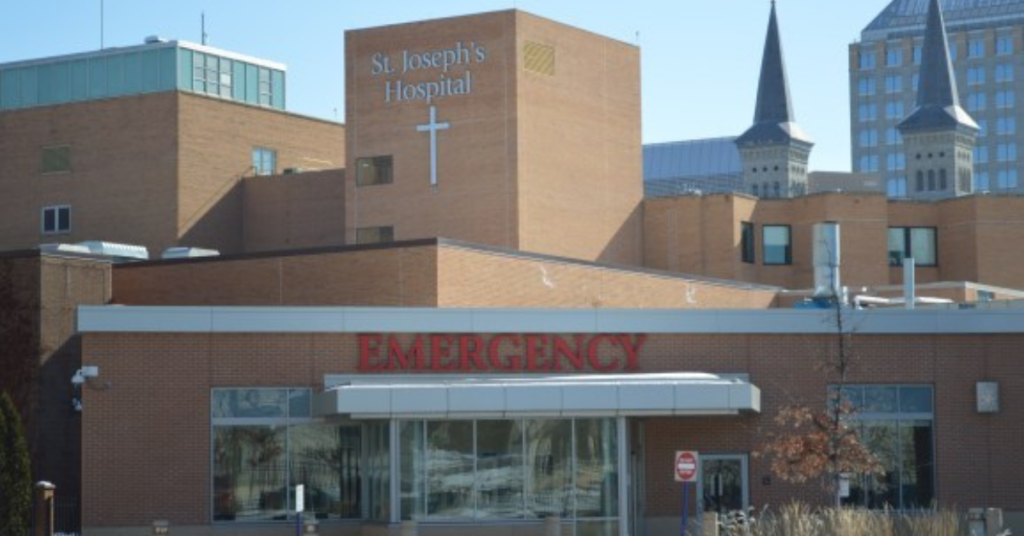 Initially, the contractions were relatively mild with little to no discomfort. But soon the transition hit, and everything changed.

My mom’s back labor became almost intolerable, with no recollection of breaks in between each contraction. The only good thing about this was that she overlooked her excruciating GERD (acid reflux) she experienced upon arrival.

Despite the back labor, pain medications were not an option as emergency surgery was looking likely. She went into labor too early.

Soon, the attending physician arrived and performed the initial examination and ordered an immediate X-ray.

What is happening, my mom thought.  Was this normal?

It was the beginning of a very intense birth story.

After being wheeled down to radiology and hearing the results, my parents got the shock of their lives!

The attending physician explained, “What we are looking at here is a multiple birth situation. There are two and possibly three babies in there.”

My mom immediately disputed this claim stating that she was going to have a 10-lb. baby boy. After all, that is what the doctors predicted.

How could this be?

In 1972, ultrasounds were not commonly used (if at all), so doctors didn’t have the resources to detect multiples that we do now.

After 12-hours of horrendous back labor, one baby losing oxygen from a prolapsed cord, and the other baby (me) coming out breech (feet-first), it was time for an emergency cesarean or C-section.

My mom’s regular OB-GYN was off that night, so his associate, Dr. Charles Crutchfield, got the call. He went from delivering a speech at the Stillwater State Prison straight to the hospital to deliver 2-3 premature babies.

As my mom learned about the plan to perform emergency surgery, she responded with,

“Just get the babies out of me!”

My mom recalls many staff coming and going, monitoring her and the babies closely. Her body wanted to push, but the doctor told her not to give in to the urge. This seemed an impossible task for my mom, and minutes felt like hours.

At this point, they still didn’t know if they were dealing with 2 or 3 babies but knew that this was going to be a high-risk delivery.

As the urge to push persisted, the danger remained, and every second counted. Baby #1 was losing oxygen quickly while Baby #2 wanted out; feet first!

The nurse stood by patiently with her hand pressed on the feet of Baby #2 to prevent further progression. Baby #1 was now in acute distress.

As they prepped my mom for surgery, she recalls our birth story: being in a room, unclothed on an icy table, and surrounded by interns and medical staff ready to witness this complicated birth.

Multiples were pretty rare in the early ’70s; all hands were on deck to help observe and learn.

My twin sister, Georganna, was born first, followed by me two minutes later. My mom didn’t get to hold either one of us as we both required immediate medical intervention, as did she.

Born, but not out of the woods.

We were both considered preemies and very small. The doctors discovered right away that I couldn’t breathe on my own.

I had Hyaline Membrane Disease (otherwise known as Infant Respiratory Distress Syndrome), which causes babies to need extra oxygen and help to breathe. My parents were familiar with this term as John F. Kennedy’s third child was stillborn with the same disease in August of 1963. Things didn’t look good.

At just over 4 pounds and turning blue, the doctors had to act quickly. I was given a 50/50 chance of survival, was immediately baptized, and read my last rights before being transported to the nearby Children’s Hospital in St. Paul.

Without even meeting me, my parents quickly chose my name, Stephanie Lee, and left it in the hands of fate.

Everything happened so fast!

I was fortunate to have been born so close to a world-class Neonatal Intensive Care Unit (NICU) with the equipment to keep me alive. I was placed on an incubator- an apparatus that provides a newborn with the environmental conditions needed to thrive. The incubator provided the oxygen I needed to survive and spent the first three weeks of my life there.

Baby #1, Georganna, was released from the hospital after 10-days. Aside from her low weight and body temperature, she was a healthy baby girl. My mom recalled how difficult it was to go home with no babies.

After three weeks in intensive care (NICU), I slowly progressed with each passing day. My strong will to live won the battle, and I eventually made a full recovery. Because we were so little, my parents had to monitor us closely and feed us every two hours. We were small and weak but were cared for well and slowly nurtured to health.

MY BIRTH STORY – A SUMMARY

Breath is life. Without this vital energy source, we don’t survive. I don’t remember this day, but sometimes I wonder if my body does, and this is why I am passionate to help others breathe well.

My mission is to help parents and children develop healthy breathing habits early in life so that they can manage stress and regulate emotions wherever they go.

Sometimes the simplest things are the most effective.

My family will be forever grateful to Dr. Crutchfield and the hospital staff who worked feverishly to help all three of us heal and survive. Thank you to the health care providers who were there that day and those who continue to help babies thrive when faced against the odds.

Breath is the finest gift of nature. Be grateful for this wonderful gift. ~ Amit Ray

P.S. If you want to discover tips and practices to breathe better, follow me on Instagram @bebuddy.  I frequently post tips and techniques to build healthy breathing habits to reduce stress, manage mood and energy.

“You can’t stop the waves, but you can learn how to surf.” - Jon Kabat-Zinn


My mission is to help kids learn how to surf through the waves of life and help raise a new generation of calm, confident, connected, and compassionate kids one breath at a time!